7/26/08
As we wander around the streets here
Every day is an adventure of sorts
Today, I was on a local bus
Heading home from the farm
Where I have just purchased
The week’s vegetables

I arrange myself on the seat,
With my three large bags of food
A local man wearing jeans
White shirt, vest and a cowboy hat
Carrying an ornately made,
Well worn twelve string guitar
Entered the bus, stood at the front
And began singing.

Rustling around in my bag
I find my camera
And take a little video of the event:

The locals stare straight ahead
Don’t look at him when he asks for money afterward
But I am happy to pay because I am always amazed
At the lack of self consciousness that people have here
When it comes to playing music in public.
Plus it was really nice.

You don’t need to have a gig,
You just go out on the bus
Or walk the streets and ask people if they would like a song
Then sing like there’s no tomorrow,
Or no rest of today for that matter.
You don’t even have to be good, you just do it
For that, I am appreciative every day I live here
And see things like this.

Besides all the auditory noise here
There are visual delights and wonders as well
Such as this delightful house, which I discovered
Several weeks ago while walking to town. A Virgin of Guadalupe tile mural
Is punctuated with muliticolored glass beads
Making a frame around her
Then colored plastic papel picado,
Cut paper party decorations
Strung across the front of the house. A simple round doorstep
Made with a collection of talavera tiles
And a winding trail of tiles on either side
Going up and down the sidewalk
With little trees, made out of flowering tiles
Beneath the oval arches above them. Everyone is out on the streets here 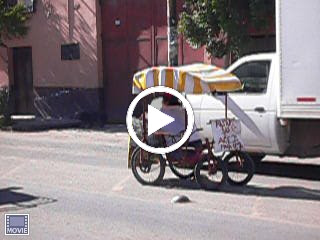 You see everyone out on the streets here
Mothers with young babies wrapped in rebozos, held close
The old, the infirm, the disabled, children selling ‘chicle’
Mariachis, singers, and young people arm in arm
No one is hiding away
Everyone has something to offer
It is gritty and real and affirming at the same time

August 1, 2008
While making lunch, we heard a truck go by
With a loudspeaker strapped to the top
It’s hard to understand what these people were saying
A bunch of garbly sounds that don’t make any sense
Even to the locals, then something like
melones, sandia, quince a vente pesos

A truck full of cantaloupe and watermelons
Is cruising the streets looking for buyers.
Anna and I run out the front door and down the street
Thinking of agua de sandia for lunch
But mostly wanting to see what the truck is like
How full of melons and enjoying the fact
That you can get watermelons
Brought to your door
Like the old milk trucks that delivered milk
In the 1950’s. The practice
Is alive and well here in Mexico.

By the time we made it downstairs and outside
The truck had gone around the corner
Missing our loud whistles calling them back.
They disappeared – all but the music and chants –
“Melones”
“Sandia”
“Quince a vente pesos”
We went back in hoping they would come down our street
Which they soon did, and we ran downstairs again
Met our neighbors in the street
To sample the goods
And buy a cantaloupe and a watermelon
15 pesos for both.
You can’t beat that. 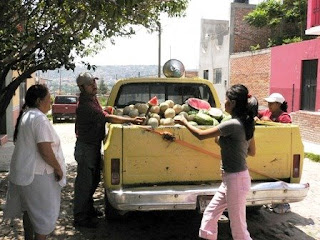 Here’s a little video – Click on the photo below
Complete with neighbors,
Music from the truck
And a window into a day in the life
Of a melon seller 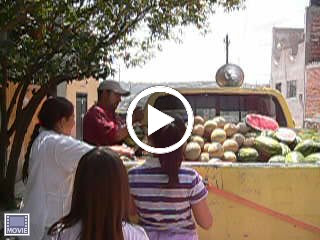 When it rains…
No Bull Will Be Sacrificed