No Bull Will Be Sacrificed

August 2, 2008
Anna, who is visiting right now
has expressed an interest in going to a bullfight
When we are downtown we see a poster
For a bullfight – Young matadors!
No Bull will be sacrificed.

I, who have been to a bullfight
Say no thanks – not because I am
An animal rights person
But because I have seen one
And don’t get the point.
Anna, who has never been to one
And is curious, talks me into it.

The bull is probably drugged
Then tortured by picadors,
Then medieval looking men on horseback
The horses wearing mattresses for protection
The bull is poked, prodded, stabbed and teased
Until the matador makes the final Kill

It’s all a little too weird for me
But nevertheless, we go in and look at the poster
Which says ‘Young matadors, ages ten to thirteen’
So we decide to go

As it turns out
We find it to be quite different
From the regular bullfights.

It’s sunny when we leave the house
By the time we get in to town it is raining
Not a good sign, but we have our umbrellas.
As soon as we pull them out, it stops
We are expecting crowds for the event
But in fact, only about a tenth of the plaza de toros is filled.
The banda arrives, wearing black and white paisley shirts,
Black pants and carrying horns, clarinets, drums and trumpets
They set themselves up under the portales
Everyone who is sitting below them moves.
The sound is cacophonous. 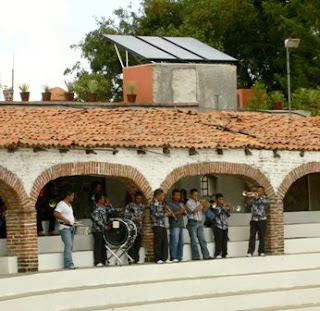 North Americans arrive in broad brimmed hats
Carrying umbrellas and water bottles
Wondering if it is going to be gory.
We arrive about a half hour before the event
Immediately order stale potato chips
In plastic bags,
dripping with hot sauce,
topped with a lime 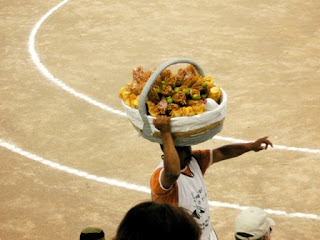 They hit the spot
As does the Snickers bar which we share
The food sellers are a group of men wearing aprons,
Carrying baskets which are filled with food
And we admire the orderliness which they pack it in.

There is no beer to be seen, but we are told it will arrive soon.
Sure enough, across the arena we see large bathtub size buckets
That say Corona moving up the stands.
It takes a minute to get over our disbelief
And see that they are empty, not full
But you might very well see something like that here

The ring has been painted with two chalk rings
A ring worker dressed in red and white
Walks into the ring with a long garden hose
Waiting for the water to come on he flips the hose around
Nothing happens, the water doesn’t come on so he leaves
His hose trailing behind him in a big loop.

The band strikes up ‘the lonely bull’ – how fitting
To announce the first matador
Three young women in red and black flamenco dresses
Ride into the ring in a convertible
Red and black mantillas, waving to the crowd
They circle the ring
The matadors and picadors enter carrying their hats 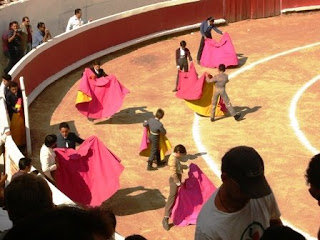 Capes are draped over their arms
They make a cross in the dirt with their feet
Relgious beliefs are brought to the ring. 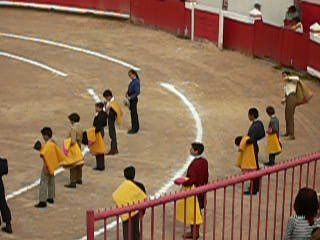 They make a left turn,
Walk to face the banda
Who play more songs for them
They take their places around the ring 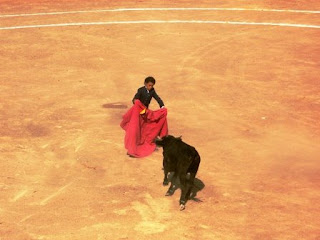 He is by far the smoothest of the group,
tall, lean and very confident
The red doors to the holding pens are opened
The first bull runs out jumping and snorting
And this video is worth at least the 25 pictures
It would take to convey the skill it takes
To maneuver around the bull.
The bull is young and small for these child matadors
But fierce and a force to be reckoned with as well.

Brandon is thirteen years old and a force himself
Self assured, body erect and so graceful,
He plays sport with this bull
Does an excellent job

Then comes:
Angel Giovianni, Age 11, Zacatecas
Juan Pablo Llaguno, Age 12 Queretaro
Fernando Gomez, Age 10 Guadalajara
Paola San Roman, Age 13, Queretaro
The only girl in the group, the only one
Of all the matadors
Who is able to wear the bull down 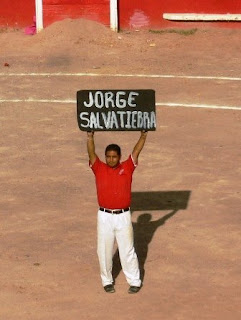 In the USA our kids play soccer, t-ball, baseball, football
Here, they do this 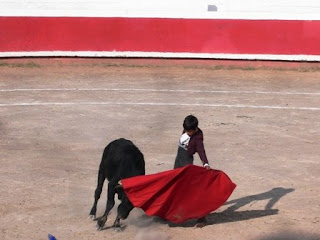 So Graceful, and so young 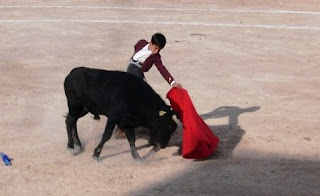 We are in awe over how
He is able to bend his body so deeply
It’s a ballet of sorts
A drama that unfolds
Minute by minute
While the crowd hopes
For some action.

The afternoon is a success,
Without injuries
Without the killing of a bull

In the end,
On the way out,
You can buy a cape,
a matador’s hat,
A boda bag with a bull imprinted on it
And most useful, a fan 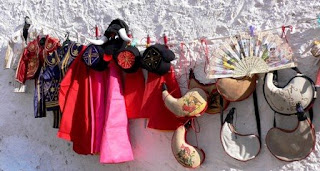 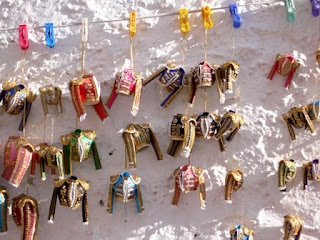